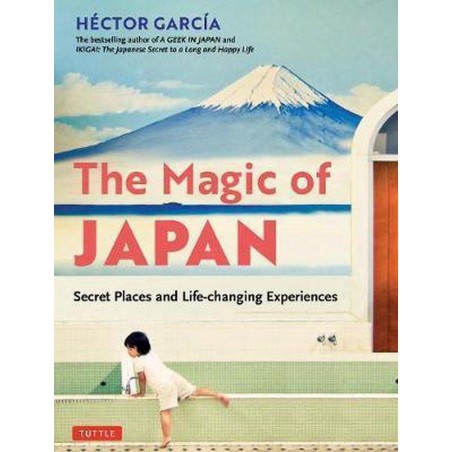 The Magic of Japan

A charming collection of quirky insights into Japanese culture. The Magic of Japan is writer Hector Garcia's intensely personal account of his fifteen years in Japan.

A charming collection of quirky insights into Japanese culture. The Magic of Japan is writer Hector Garcia's intensely personal account of his fifteen years in Japan. A self-professed otaku or Japanese anime geek since childhood, Garcia has worked for a Japanese software company, mastered the language, and become one of Japan's most popular bloggers. This book is the culmination of his experiences and showcases Garcia's unique ability to delve beneath the surface of Japanese culture to describe its quirky and deep spiritual underpinnings. This collection of essays and beautiful photographs will appeal to his worldwide fan base-including those who devoured his previous bestsellers, A Geek in Japan and Ikigai: The Japanese Secret to a Long and Happy Life-Japanophiles, armchair travelers and anyone with an interest in cultural and travel memoirs. The Magic of Japan features Garcia's keen observations on a wide variety of cultural topics: Japanese behavioral traits, including non-verbal communication, hansei (self-reflection), heijoshin (a calm mind) and shoshin (childlike openness) How Japan's geography and history have shaped its culture-its natural disasters, scarce resources, centuries of isolation and its feudal past Japanese idiosyncrasies, ranging from food traditions and absurd jobs to a love of queues The Japanese spirit, as evidenced in traditional art, manga and attitudes to women Shintoism and Buddhism, looking at temples, festivals, rituals and how religious beliefs pervade popular culture, as seen for example in Studio Ghibli's movie Spirited Away Japan's dark side, including crime, the yakuza, adultery, bullying and suicide The book ends with a gloriously random selection of all things Garcia considers especially magical about Japan-from izakaya to shiitake mushrooms, summer fireworks and green tea!
9784805316528