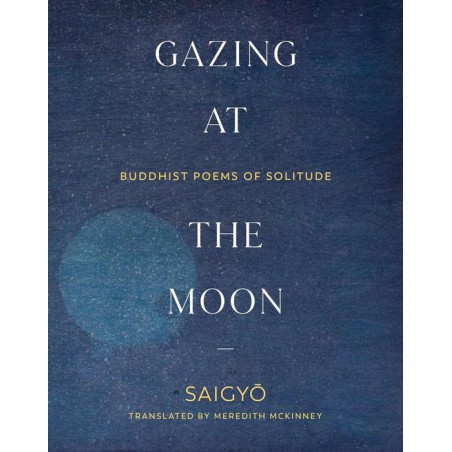 Gazing at the Moon

A fresh translation of the classical Buddhist poetry of Saigyō, whose aesthetics of nature, love, and sorrow came to epitomize the Japanese poetic tradition.

A fresh translation of the classical Buddhist poetry of Saigyō, whose aesthetics of nature, love, and sorrow came to epitomize the Japanese poetic tradition.

Saigyō, the Buddhist name of Fujiwara no Norikiyo (1118–1190), is one of Japan’s most famous and beloved poets. He was a recluse monk who spent much of his life wandering and seeking after the Buddhist way. Combining his love of poetry with his spiritual evolution, he produced beautiful, lyrical lines infused with a Buddhist perception of the world.

Gazing at the Moon presents over one hundred of Saigyō’s tanka—traditional 31-syllable poems—newly rendered into English by renowned translator Meredith McKinney. This selection of poems conveys Saigyō’s story of Buddhist awakening, reclusion, seeking, enlightenment, and death, embodying the Japanese aesthetic ideal of mono no aware—to be moved by sorrow in witnessing the ephemeral world.